With Lunar New Year around the corner (Feb 12 this year for those who didn’t know) I thought it’d be a great time to share a dessert my family always made to celebrate. My family has always made this specific dessert whenever there was a special holiday, or an important event taking place. While I did end up making the Cambodian version, the rice balls are made in the same manner and can be used in the other versions if you wish to serve it as such.

Tangyuan or tang yuan is a glutinous rice ball dessert commonly found in China. It’s typically eaten during specific holidays and celebrations such as Chinese New Year, Mid Autumn Festival, or during the Winter Solstice. Traditionally, you can find it served filled with black sesame inside a sweetened water soup. In Hong Kong, it is known as tong sui. While most people will know about the sweetened version, some people also make a savory version where it will be added to savory soups. Nowadays, you can find these rice balls in just about any chinese supermarket and enjoy them anyday you wish.

Although most will think of the Chinese version when they see them, they can also be found in Southeast Asian cuisines such as Cambodia. In Cambodia, they have a dessert called Banh Ja’neuk which is filled with a mung bean paste and served in a sweet coconut ginger sauce made with palm sugar. I grew up eating the Cambodian version and it has become one of my favorite kinds to eat. I will note that I was never a fan of the mung bean filled once and would always eat the plain ones. If you are interested in the mung bean filled ones, let me know in the comments below and I will update the recipe to include it!

Other desserts by other cultures that utilize these glutinous rice balls include: 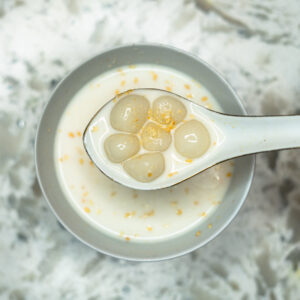 Popular Cambodian dessert which is typically filled with a mung bean paste. Usually this is made for special occasions but I would make it any time of the year!
Print Recipe Pin Recipe
Prep Time 10 mins
Cook Time 20 mins
Total Time 30 mins
Course Dessert
Cuisine cambodian
Servings 4 Servings

*Ginger is optional, feel free to exclude if you don't like the taste of ginger. *Start with ⅛ cups of sugar for the coconut sauce and add more if you'd like it to be sweeter. *If the coconut sauce is not sweet enough, add more sugar ½ tablespoon at a time. If the sauce is too sweet, dilute with ¼th cup of coconut milk. *Glutinous rice balls may be made ahead of time. Be sure to store in an airtight container and freeze up to 1 month. *The dough is easily salvageable if it is too wet or too dry, so do not panic. *It is important to use boiling hot water when mixing the dough.
Keyword banh janeuk, glutinous rice balls, rice balls, tang yuan
Tried this recipe?Let us know how it was!
« Quesa-Birria Tacos with Consomé
Bánh xèo - Vietnamese Savory Crepe »

I'm Brandon, also known as Blim! I personally create all the content you see on this blog and my IG. Food has always been my passion and I could talk forever about it. I love exploring different cuisines and my hope is to encourage people to try cooking or trying out one new dish, Read More…